Throughout history, the City of Zadar (in the past: Jadera, or later Zara) was always one of the jewels of the Adriatic Sea. Appealing by its geographic position, mild climate, having a myriad of memories and imagination-invoking monuments, and by the beauty of its cost and nearby islands, Zadar evolved into one of most favorite touristic destinations on the Adriatic.

Still, worldwide, locations with the intense tourism deal with the severe stress on its water quality. Therefore, close care must be dedicated to the water quality monitoring to assure the sustainability of both environment and tourism-oriented economy.

Zadar is nowadays an example of good practice since its coastal waters are in continuity characterized by the high level of quality.

By strengthening the wastewater treatment capacities, smart redirecting of wastewater discharge to larger depths in the Zadar canal, and relocating the transit port to the outskirts of the city area, resulted in the non-quenched auto-purification of coastal waters. Nowadays, public health for swimmers is ensured at all beaches within the city, irrespectively of the nearby degree of urbanization.

To test the actual coastal water quality during the peak of the touristic season with the highest level of anthropogenic stress, SeaCras Ltd. performed remote sensing by satellite analysis of water quality parameters. By applying the low-turbidity models to analyze the satellite data, the water quality was studied during July and August in the summer of 2019. The analysis was in agreement with the official data released by the legal entity for water management (Zavod za Javno Zdravstvo under supervision by Hrvatske Vode), which means that the water quality near reference stations is of high quality. To go further, SeaCras Ltd. mapped the entire coastline and the canal of Zadar. The results of selected dates in July and August are given in the figure below. 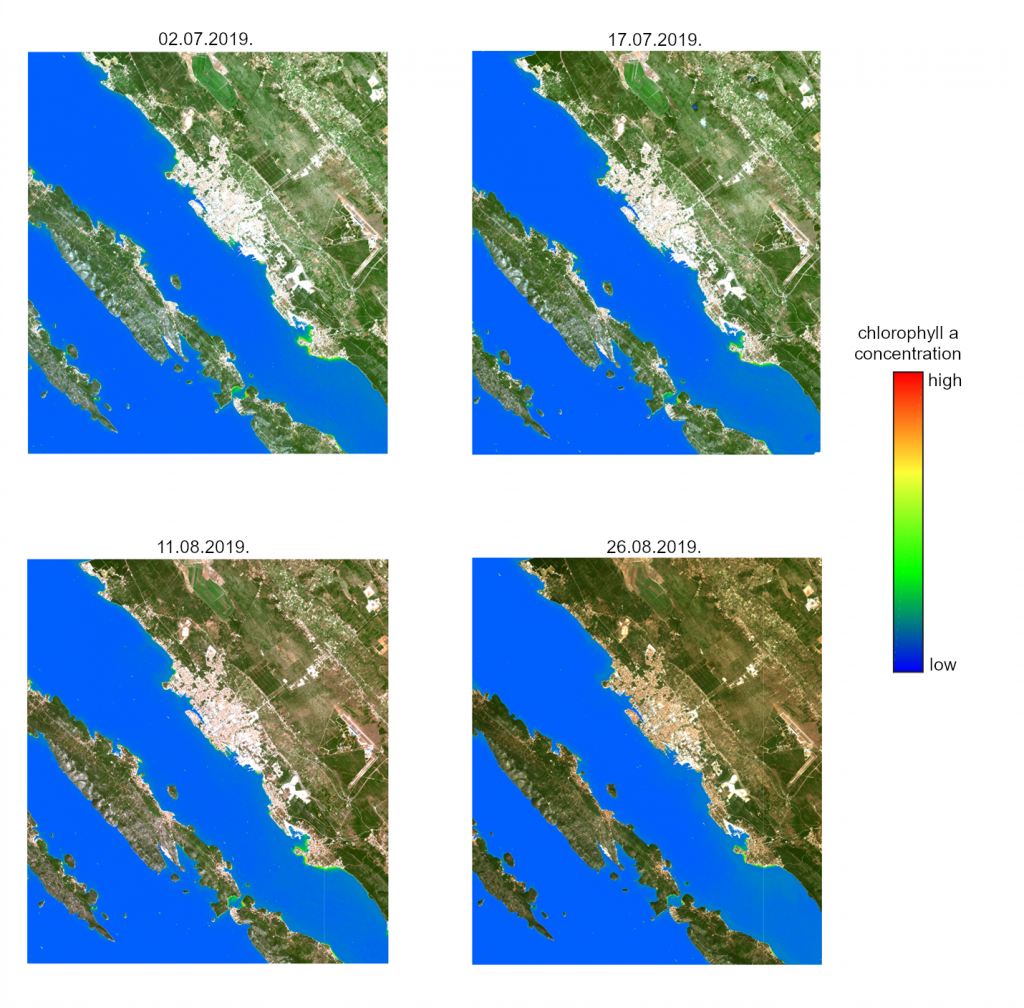 Chlorophyll a is just one of the water quality parameters directly involved with the presence of local pollution. It may be observed that most of the operational coastline of Zadar has a low level of Chlorophyll a, which points to the high quality of water. This practice of satellite data analysis complements traditional in situ measurements to achieve a complete picture over the entire location and gives more frequent analysis.

Indeed, SeaCras Ltd. provided the high-fidelity satellite data to confirm that Zadar remains one of the few coastal cities on the Mediterranean Sea with the high quality of its coastal waters, throughout the most of its operational coastline. With both environmental and economic sustainability goals seemingly satisfied with the example of the city of Zadar, there is still a lot of work to expand this practice to nearby villages and islands, as well as to the rest of Croatia’s coastline.